American Tower operates in an industry with near-impenetrable barriers to entry. The cell tower business is capital and time intensive to scale at a meaningful level. A lone cell tower is not expensive to build (up to $300,000 in the US and Canada) but obtaining regulatory approvals and complying with zoning restrictions on federal, state, and local levels deters companies and investors from entering this industry as it may take years to approve a new tower build.

The nature of American Tower’s lease agreements results in substantial switching costs. According to Crown Castle, a tenant would incur between $35,000 and $40,000 to switch from one tower to a neighbouring one, roughly 20 to 30 times the average monthly lease amount. Additionally, American Tower’s initial contracts with tenants are generally non-cancellable for a period of 5 to 10 years.

When we think of network effects, we mainly think of our flashy iPhones and the benefits of all our friends using iMessage or AirDrop, or the stickiness and appeal of Lululemon gear to the yoga community. Who knew boring steel or lattice towers benefit from network effects too? Typically, when a wireless carrier places equipment on a tower in a new location, it now becomes the best interest of every other competing carrier to place their equipment on the same tower.

Enduring the long regulatory process for building a new tower is a costly endeavour – one that could result in many lost customers. Even if a carrier could magically build a new tower within a few days, it would still make more sense to lease a tower due to the amount of money saved versus building its own tower.

These barriers to entry, switching costs, and network effects, combined with American Tower's aggressive expansion strategy and fixed operating structure allowed the company to become the behemoth that it is today. American Tower has powerful operating leverage – as more tenants occupy a tower, the greater the ROI.

Capital maintenance requirements are low, whereby spend per tower is typically no greater than $1700 in the US and $800 in international markets. Based on American Tower’s illustrative example of new macro tower build economics, there are negligible operating costs associated with added tenants on a tower. As more tenants are added to occupied towers, margins expand and cash flows to the bank. 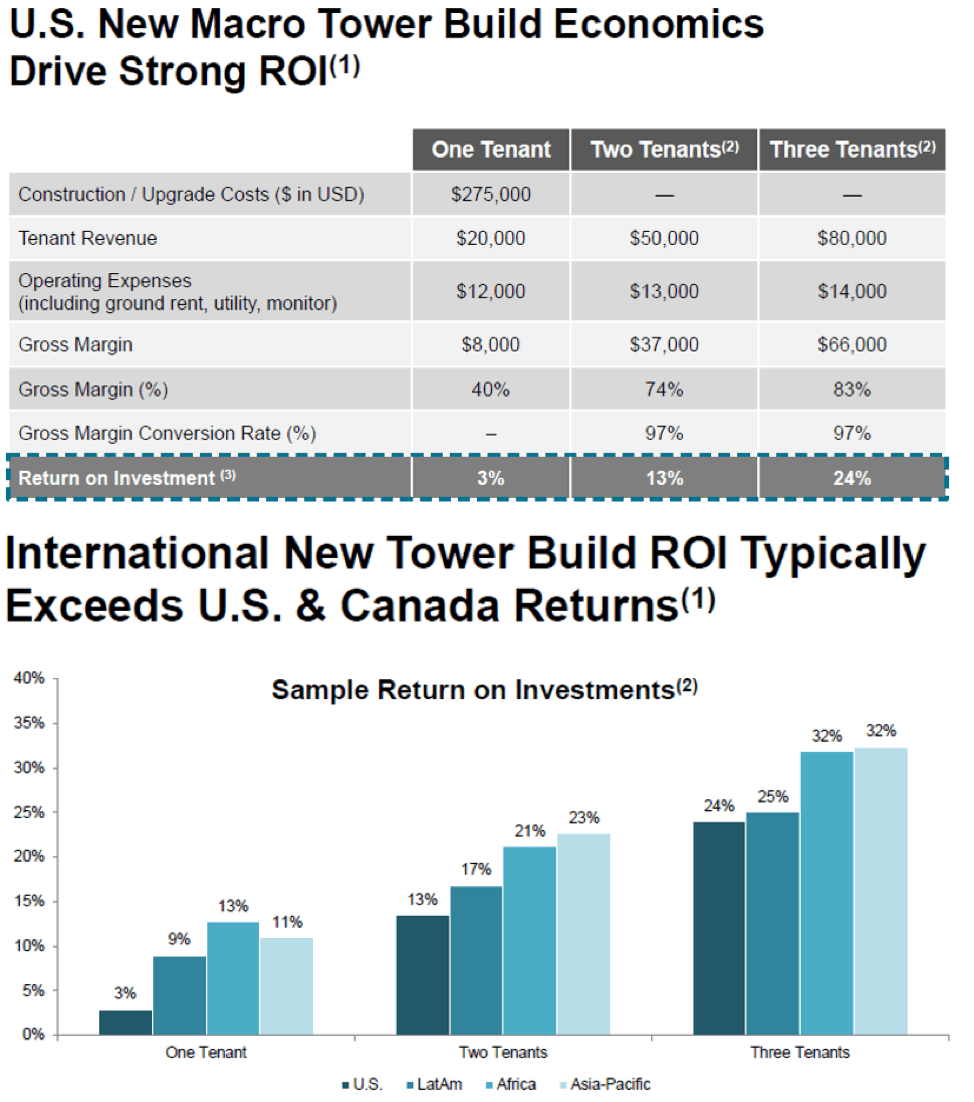 We can see these economics at play through American Tower's stable gross profit when looked at relative to the number of towers operated.

We can be confident in saying that as American Tower builds or acquires new towers, it will add non-dilutive growth to the bottom line.

In other words, the gross profit per tower stays the same over time even though new builds may not have any carriers leasing them yet or acquired assets are underutilized.

Eventually, American Tower tends to ramp-up leases of its towers and we believe this metric is an important one to follow.

One may get the sense that American Tower comes without any risks. Unfortunately, even for this tower behemoth, there are some risks all investors should consider: