The company’s major competitors are Nikon and Canon in the DUV market. When it comes to software, ASML is primarily up against Applied Materials and KLA-Tencor.

Manufacturing EUV machines is a costly and complex endeavour that few companies attempt. Each machine has about 100,000 components, cost around $150 million to purchase, takes two or more years to manufacture, and is shipped in 40 freight containers or four planes.

In fact, Nikon and Canon lost out on the race to develop a marketable EUV machine as the next-generation version of DUV to none other than ASML. After losing to ASML, both companies pulled back all EUV efforts. ASML now owns the entire EUV market, and these competitors have almost no chance of catching up if they even tried, that is.

ASML's major customers, Samsung, Intel, and TSMC - the biggest chipmakers on the planet - started buying ASML’s EUV machines in the early 2010s. For these firms to maintain their competitive edge, they must continue to invest in (1) capacity and (2) the latest, cutting-edge manufacturing technology and equipment. Despite DUV machines selling at a much cheaper price point and continuing to maintain relevance in today’s market, it is clear ASML's EUV equipment options suit these advanced chipmakers’ current and future needs and plans best. Technology is getting more complicated and the world is demanding more. 5G, AI and ML, electric vehicles, and future technologies we have yet to encounter will continue demanding ever-advancing chips. 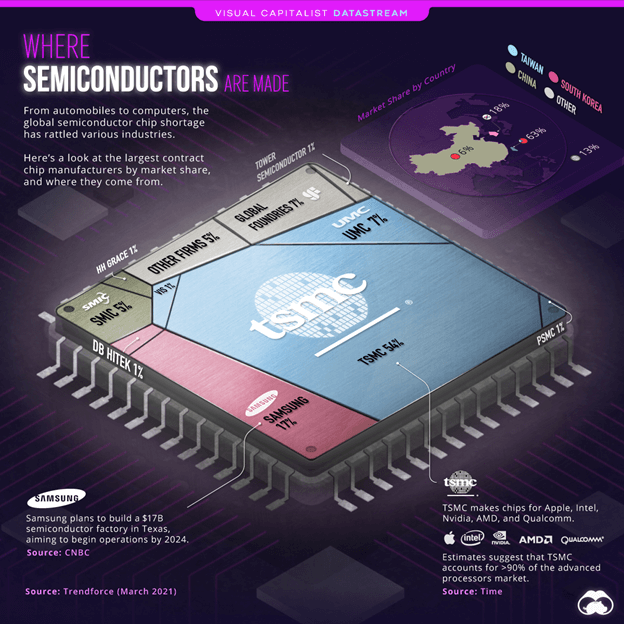 ASML's monopoly position in the EUV market can be attributed to three main things: its massive and highly knowledgeable research and development team, key partnerships, and exceptional acquisition targeting and integration.

ASML takes research and development seriously. Over 10,000 employees work either on the Research or Development & Engineering ("D&E") teams out of seven main R&D centres located in the Netherlands, US, China, and Taiwan. As a fast-growing lithography equipment manufacturer of the world’s most advanced equipment, ASML can tap into a highly technical, knowledgeable, international talent pool.

Researchers generally hold at least one PhD degree in science or mathematics, forming a department with high technical skill and innovative abilities. The smaller research teams pass off ideas through an "innovation tunnel" to the D&E team for testing and development. D&E teams are generally larger and involve more travel. The D&E team is split into "functional clusters" that allow these professionals to collaborate and share knowledge freely between each other. ASML's R&D team is clearly one of the greatest on the planet as evidenced by the success of the EUV machine that took over two decades to develop as every single other manufacturer gave up on their own EUV development efforts.

Internal R&D efforts are supplemented by the company's openness to and recognition that employ external stakeholders is a high-leverage, high-upside strategy. When EUV lithography development at ASML was underway in the early 2000's with high risks that the company's efforts would not materialize into any sort of marketable or profitable product, ASML had faith in the process, and its stakeholders did too. Not only that, but these stakeholders also relied on ASML to create an exceptional, working product. They depended on it for their own survival and relevance.

Japanese manufacturers were skeptical of EUV development efforts due to the high complexity. However, major chipmakers, like Samsung, Intel, and TSMC, were not able to take "no" for an answer. In 2012, Samsung purchased a 3% stake of newly issued shares in ASML, following the investments Intel and TSMC also made in the business. Intel and TSMC owned as much as 15% and 5%, respectively, in the early half of the 2010s.

All three chipmakers have since cut their positions in ASML now that it is a cash-generating machine, but the strategic intent in the early half of the 2010s was clear - ensure ASML completes development of EUV machines and build a strategic partnership with ASML prior to commercialization. These companies hoped to speed up the development and adoption of EUV machines to start building more advanced chips and progress Moore's Law.

For a long time, ASML has collaborated with chipmakers to deliver products that meet their standards and expectations. This level of collaboration is unmatched, and we believe this will continue as ASML appears to be the only lithography equipment manufacturer capable of advancing the concept even further. We see the major chipmakers continuing to collaborate with ASML through the High-NA machine development process, as well as technologies beyond that.

Aside from the chipmakers, ASML leverages relationships with other partners, like suppliers, and conducts acquisitions only when they would help fill a development gap that ASML may not currently have or needs to expand on.

In 2016, ASML bought 24.9% of ZEISS subsidiary, Carl Zeiss SMT, a long-standing partner of ASML that has been supplying ASML with high-performance optics parts for its machines. This strategic partnership was taken one step further to create a win-win relationship between the two firms. Zeiss exclusively manufactures optical columns for ASML's lithography systems as ASML's sole supplier. One’s success depends on the other, and vice versa.

Both events contributed strongly to ASML's current position in the EUV market. Without these partners, it is possible ASML may not have finished the EUV development process for the invested chipmakers that were counting heavily on ASML.

ASML has set the bar high, and we think it will continue to do so. More specifically, as the world’s sole manufacturer of the advanced EUV machines, ASML has shown that it is the only company that can continue to innovate beyond DUV. Every other lithography manufacturer, unfortunately, has failed in its efforts.

As chipmakers will continue seeking more advanced lithography equipment as they build out fabrication capacity and create better, faster, and more efficient chips, ASML is the only lithography manufacturer chipmakers can turn to.

A powerful self-fulfilling feedback loop has been created - not only does ASML have a monopoly on EUV machines, but the company also has a monopoly over the feedback and suggestions it receives from chipmakers. ASML is the only company that can use this information to continue advancing chipmaking equipment while competitors increasingly fall behind.

All these overwhelmingly positive traits ASML possesses - monopoly position in EUV, immense R&D efforts, key strategic partnerships with massive stakeholders with substantial "skin in the game", and high barriers to entry - congregate into another major advantage.

ASML has substantial pricing power over its EUV machines. While its DUV machines have been selling around €25 million per unit for years, ASML's EUV machines initially sold for around €75 million in 2015 while selling at an average price of €150 million today.

ASML is a different company today than it was pre-2016. It has carved out a monopoly that it will only expand on as chipmakers look to advance Moore's Law this decade and beyond. The growth of the EUV segment in terms of unit sales as well as average selling prices is encouraging and frankly exciting for the prospects of the company.

Along with pricing power comes operating leverage, assuming ASML will not face any major costing pressures over the next several years. The company's margins have been steadily rising over time, and we expect them to continue to rise as the company flexes its pricing power.

Although ASML holds a monopoly in EUV, it does not hold a monopoly in the semiconductor manufacturing equipment space. Some of ASML’s competitors, like Applied Materials and Lam Research, focus on the deposition and etch manufacturing steps as opposed to lithography.

The reality is that EUV lithography is not truly required to make advanced chips. Development of 3D DRAM chips is gaining steam as firms like Samsung seek to add more memory and density into their chips. 3D DRAM would not require EUV lithography (DUV might suffice), which may reduce demand for EUV and EUV+ machines in the mid part of this decade.

To progress with these chips, it is widely believed there will be greater focus on advancements in the etch and deposition steps of the manufacturing process. For example, Micron does not believe EUV would immediately drive advancements of 3D DRAM nor is it the most cost-effective solutions.

Despite this skepticism from some industry insiders, however, Samsung has attested to the power of EUV and intends on using it to advance the newest DRAM development. Samsung appears to be spearheading the industry into 3D DRAM, with expectations that 3D DRAMs will hit the market around 2025.

At this point in time, we believe Samsung’s heavy commitment to 3D DRAM using EUV technology will pave the way for the industry. Although EUV may not be technically required, competitors may lose out to those companies that employ EUV as opposed to DUV.

Nonetheless, the semiconductor industry is highly competitive and dynamic. This risk should certainly not be ignored.

ASML has substantial backlogs on its books, but there is no guarantee that the future beyond, say, 2025 will look rosy.

We are uncertain whether chipmakers are potentially overreacting to the chip shortage crisis today. It is possible that these chipmakers are overproducing chips to avoid further shortages that may not materialize. If their capital expenditure plans are based on growth estimates that prove to be too high, fab expansion and EUV demand may stall out or drop.

Similarly, demand in the near-term may be close to peaking, after which capacity buildouts may slow down substantially.

ASML is in the business of pushing the boundaries of science. EUV technology took about two decades to create and market as a viable product, and it is an extremely advanced and precise machine already.

The company is planning on advancing through the High-NA EUV technology, which will push the boundaries even further with smaller wavelengths than the already-impressive 13.5 nm EUV technology.

Beyond the High-NA EUV technology, we are not certain what the future holds. Although advancing Moore's Law through lithography may theoretically be possible, it may pose a massive financial burden on ASML, take decades to develop, and possibly face low market appetite for such machines. If chipmakers no longer require or desire more advanced EUV lithography, ASML would experience a large drop-off in demand.

ASML is actively seeking alternative suppliers for neon gas it sources from Russia and Ukraine. The company uses these gases as part of its production process.

Should the Russia-Ukraine conflict escalate further, and no alternative suppliers are found, ASML might struggle to source about 20% of its neon gas requirements or face much higher prices for the neon.

It is possible ASML could face top-line and bottom-line impacts should neon shortages and price hikes arise.