CN Rail is the only railroad network in North America today that connects three coasts – the Canadian east and west coasts, down through the US Midwest to the Gulf of Mexico.

Operations and connections to ports across such geographical coverage presents CN Rail with a few distinct advantages. For one, the company can tap into a greater number of product verticals than other railroads. For example, CN Rail can transport oil from Alberta, Canada, and provide services for car parts and finished vehicles from Asia, Europe, and Mexico throughout North America.

Various product verticals and vast geographical coverage also means customer diversification – CN Rail collects roughly a third of revenues from US and Canadian domestic traffic, a third from transborder traffic, and a third from overseas.

In the case of CN Rail, it has been hauling rising amounts of revenue ton miles (i.e., "RTM" or revenue earned for carrying one ton of freight over one mile). Additionally, it has been earning more revenue per RTM, showcasing the strong demand for CN Rail's transportation services across North America.

There is no question CN Rail’s three-coast network provides one of the most attractive shipment options for customers, originating 85% of traffic on its network (as opposed to a transfer from another railway before the end destination is reached) and being the end carrier for over 65% of traffic. CN Rail currently only operates in the US and Canada, but it facilitates business from almost every continent.

We believe that new entrants face near-impossible barriers to compete against incumbents, including CN Rail. Their investments would likely take years to pay off, not to mention the time it would take to build the network. Each railroad enjoys a geographical moat due to the capital intensity of their operations, density of established networks, and vast geographical coverage in this industry. 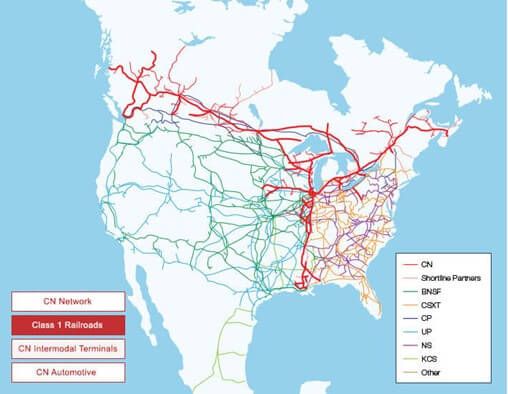 CN Rail pioneered Precision Scheduled Railroading ("PSR"), a strategy used by virtually all Class I railroads today. It uses point-to-point (i.e., direct transportation between two locations, avoiding any central hubs or stops) stops across its network of track and terminals to pick up and drop off train carts. The underlying idea of this methodology is to host a simplified network composed of many direct routes by using the same or marginally greater amounts of freight. Hunter Harrison, the ex-CEO of CNR, created this system to ensure each cart was used to its full potential.

PSR calls for the creation of a schedule to pick up and drop off carts at train terminals regardless of train length - the basis of traditional rail service - along any given route. This ensures carts are not sitting idle in a lot for extended periods of time, removes bottlenecks, uses physical and human resources to the greatest level of efficiency, and keeps the network flowing constantly. Rail companies that use this approach benefit from operating efficiencies, network speed, and customer satisfaction.

CN Rail is now building "Digital Scheduled Railroading" ("DSR"), another ‘"first" in the industry that builds upon PSR with an extra layer of advanced technology and automation to further improve the capabilities of its strategy. In simpler terms, DSR is PSR wrapped in technology. DSR has several important implications:

CN Rail is benefitting tremendously from these efforts - the company is now able to inspect 20 times more track than the pre-DSR era, defects are identified on an automated basis before they become grossly destructive, and it boasts the highest fuel efficiency out of any Class I railroad, consuming 15% less fuel per gross ton mile than the average Class I North American railway peer.

CN Rail sees the way forward is to invest in technology to increase efficiency, keep customers satisfied, and enjoy higher revenues and margin expansion in the process. Other railroads are not as technologically inclined as CN Rail, granting the railroad with a unique technological advantage over other North American railroads. We expect operating metrics to continue to improve throughout the intermediate time horizon as these efforts translate into efficient spending and growing revenues.

A Blessing and a Curse

While we believe CN Rail's grain-affected business will grow over the long run, the company is facing some headwinds in the near term.

The Canadian Prairies and west coast are experiencing lots of extreme heat, pulling forward crop harvesting and reducing crop yields. In 2022, CN Rail sees grain volumes dropping 35-40% rather than its initial forecast of +5%.

Grain and fertilizers make up about one-fifth of CN Rail's revenue. The substantial drop in grain volumes will certainly be noticeable and could put pressure on shares through the end of 2022.

CN Rail depends on chips for the transportation of automotive vehicles. This chip shortage has significantly decreased the incoming supply of vehicles. Although these effects are likely transitory, we are uncertain as to the length and extent that these shortages will continue and may pose a financial risk to CN Rail over a longer time horizon.

Virtually all of CN Rail's revenues are generated from industries that fluctuate significantly with the market. When the economy does poorly, or any of these sectors struggle, CN Rail's financials could face strong headwinds in the near term.

Joe Biden's recent executive order issued to the STB to examine rail competition may set a new precedent in the market that puts consolidation further out of favour and hurts profitability for the railroads.

This order may prevent railroad consolidation in the future, place a cap on freight rates, and increase costs for the railroads, including CN Rail.

The railroad industry has been heavily consolidated since the 1980s, leaving little room for further consolidation. The industry is mature and one of the only ways for a company to grow is through acquiring other companies. With KCS no longer a target, it does not appear there will be any compelling opportunity for consolidation for many, many years.

About 70% of CN Rail's workforce is unionized. Disputes relating to the renewal of collective agreements could result in strikes and major business disruptions, adversely impacting CN Rail's competitive positioning and financials.