A growing consumer base creates a positive feedback loop for Costco. Each incremental member benefits the existing pool.

Costco has immense negotiating power with its suppliers. Products are sold in bulk at Costco, which means Costco constantly buys large amounts of inventory from its suppliers. Because of the sheer size of these inventory purchases, Costco is able to buy at low prices per unit due to the size and speed of its inventory turnover. Costco is a large customer to its suppliers, so the suppliers work to keep Costco happy by keeping prices low.

This kind of negotiating power is only possible due to Costco's substantial member base. As Costco’s membership base increases, Costco has better economies of scale and negotiating power with its suppliers. This is a classic example of a strong network effect - a wider customer and supplier network introduces more members on both sides due to the advantages both attain from shopping at, or doing business with Costco.

Everybody wins - Costco members get great prices, suppliers are able to move huge amounts of products and services through the Costco network, and Costco fulfills its goal of being customer-centric. 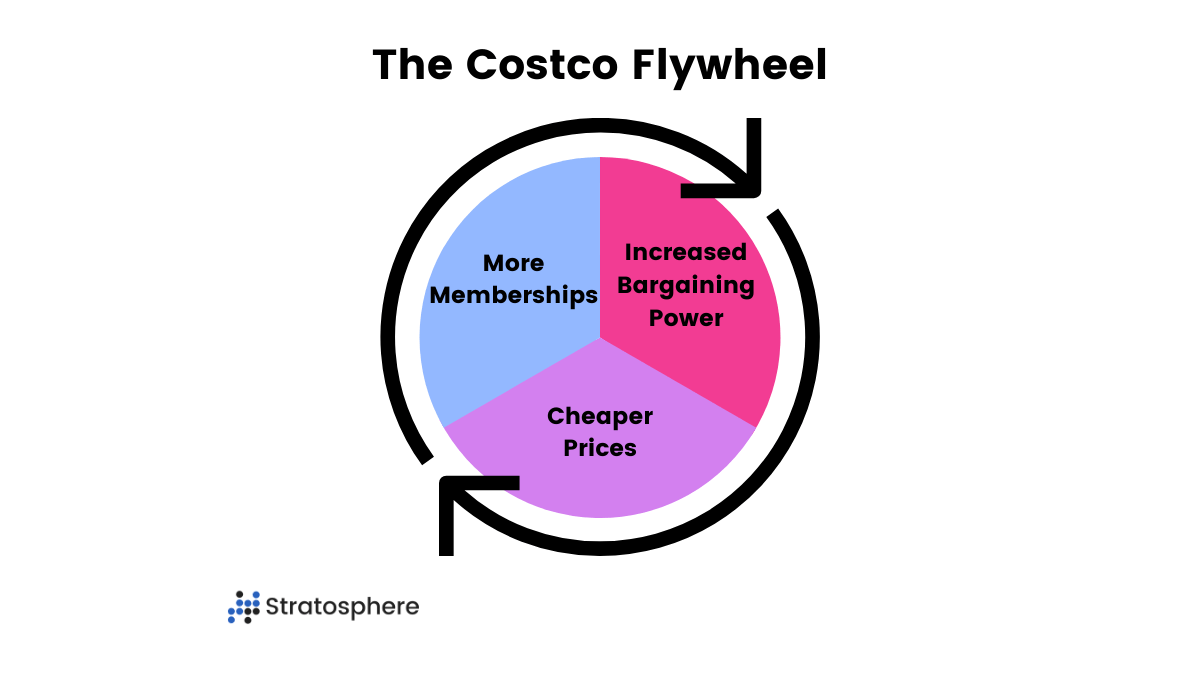 This flyhweel effect exists because Costco truly understands the importance of a customer's shopping experience. Costco has established a customer-centric culture that focuses on customer satisfaction and is known for its lenient return policy through which members can return almost any product, no questions asked.

Since its foundation, the company has strived to create a culture that cares for the customer and staff satisfaction. The result is brand loyalty, an efficient workforce, and a differentiated brand. Perhaps, then, it is no surprise that Costco holds a near 90% renewal rate with its members.

The company's revenue per square foot continues to rise and sits over $1,600 / square foot as of 2021. Other retail behemoths, like Home Depot, Walmart, or Lowe's, have sales per square foot readings that are fractions of Costco's figures.

Costco's warehouses (i.e., store locations) contain skids of products for members to purchase products from, mimicking exactly what a wholesale warehouse looks like. This warehouse model has product handling advantages as customers can select products directly from the warehouse floor. The stores do not look pretty because they do not have to - customers are there for the low prices and bulk purchases that their memberships entitle them to. While other retailers stock shelves with an attempt to make them look appealing, Costco saves this effort and pockets the savings.

This method of storing inventory introduces supply chain advantages through limiting the number of touchpoints and hand-offs of skids and groups of items. The more checkpoints there are between the original manufacturer to the location customers purchase the products from, the more expensive, inefficient, and room for error the supply chain process gets. Costco circumvents several checkpoints that other retailers deal with by unloading products in a warehouse in their original full packaging on a pallet.

Costco also caps the number of SKUs (i.e., unique item categories) it carries at 4,000. While stores like Walmart can carry as much as 40,000 SKUs, Costco maintains this cap to focus on products with quality, low price, and a reputable brand. These products are also only found in one packaging format per item to maintain simplicity.

This comprehensive model makes it easier for Costco to strategically place all of its products in the warehouses to optimize space. It also gives Costco an easy method to update or refresh the warehouse layout every month. These strategies are tailored in a way to ensure that each store can generate the most sales per square foot by encouraging customers to walk around the store and pass by varied items. If products are placed in accordance with this strategy, Costco will benefit from customers purchasing larger basket sizes, on average.

A strategy is only as good as the degree of positive impact it has on key financial metrics. Costco's inventory turnover ratio (i.e., a measure that estimates the number of times the company turns over all of its inventory in a year) has been hovering around 12x over the last decade. Once again, this is much higher than other large retailers, like Walmart or Home Depot.

The company is efficient with its store model, and as a result, it is able to sell tons of inventory to members. The more "turns" Costco can get with its inventory, the more revenue, and ultimately profit, the company is able to generate.

Costco sells some products through its in-house, private label brand, Kirkland Signature. This brand exists primarily because Costco is able to control the cost and, therefore, the consumer price of this product line. Kirkland covers a vast range of items, from food and home items to supplies and self-care products.

Costco specifically targets product categories that contain high-priced products. Through Kirkland, it can then undercut those relatively expensive items by creating a viable and relatively cheaper alternative. Customers have these alternate options at Costco, and nowhere else - at least not to this extent.

Additionally, Kirkland Signature holds substantial brand power as consumers are familiar with Costco and its values, which are reflected in the brand's products through good quality at a low price.

With this brand power, Costco is able to draw customers to continue being members and shopping at its stores due to the exclusivity of Kirkland products.

In the US, there are a handful of competitors who stand against Costco, such as Walmart's Sam’s Club and BJ's Wholesale Club. Both competitors hold a similar focus to Costco, providing memberships to gain access to wholesale items.

Sam's Club's main advantage over Costco is its membership fees being 25% cheaper. This difference in price may the defining factor for many customers as both businesses have similar structures.

Costco's operations are mainly found in the US and Canada, which make up over 85% of revenues and over 80% of operating profit combined.

The US and Canada are regions in which e-commerce penetration is really high, with many alternate options as well. While the value proposition at Costco remains strong today, e-commerce options like Amazon and Walmart that offer thousands of items with free shipping and in some cases, same-day delivery, pose a threat to Costco for purchases like electronics and other ancillary, primarily non-food items.

Costco's business model and success to date is attributable primarily to its warehouse shopping via paid membership approach, success despite a limited inventory selection, and immense bargaining power it has been able to achieve.

However, e-commerce is growing, millennials are taking an increasingly larger share of the market, and consumers of today prefer online shopping to a much larger extent than the consumers of 20 or 30 years ago.

Costco, therefore, faces a dilemma here. On one hand, e-commerce through an omni-channel approach for large brick-and-mortar retailers is absolutely necessary. On the other hand, doing so could wipe out many of the cost efficiencies that got Costco to the state it is at today.

Costco, however, continues to believe that members will continue shopping at the store. In the Q3 2020 earnings call, CFO Richard Galanti stated, "We still want you to come in. You're going to buy more stuff when you come in, period ".

Unlike any other brand, Costco is able to offer incredibly low prices. In fact, without membership fees, Costco would make virtually no money (assuming everything about its operations remained the same). The membership fees are the largest driver of profits and is what enables Costco to provide such low-cost products and services.

With that, we believe that consumers will continue shopping at the store to take advantage of these low prices. Anecdotally, anyone can attest to the long lines at Costco pumps or within the store. Traffic is high and the spend per member continues to rise.

Overall, e-commerce should act as an opportunity to Costco, as long as most members continue shopping in store. Without the in-store benefits, the value proposition of Costco could quickly fade away.

As Costco continually looks to expand its business into other countries, the risks arise if these stores do not have the same uptake as North American locations. People around the world support different values and the same success strategy in one part of the world may not always translate to another part.

If Costco does have a location that is not successful in a certain country, it may affect Costco’s plans for international expansion.

However, as of right now, we see no significant risk in these expansions as Costco has a proven track record of success in countries such as China, Iceland, Japan, and South Korea.

International expansion is certainly part of the growth opportunity for the business.

While the underlying business fundamentals have grown at impressive levels - attesting to the high quality of the business - the company trades at an earnings multiple above 40x, more than double that of its peer average (Walmart, Target, BJ's Wholesale Club, etc).

Given the competitive, e-commerce, and international expansion risks, we think the valuation today is rather unattractive. Even if Costco doubles its EPS over the next 5 years, the company would still be trading at a low 20s P/E ratio at today's share price. This is roughly the average that Costco's peers are trading on next year's earnings.