CP Rail owns a railroad network in North America that connects the Canadian east and west coasts, as well as several Midwest US states.

With access to eight major ports and key markets across North America, CP Rail is able to carry a wider variety of goods compared to its competitors. Additionally, vast geographical coverage also means CP Rail's customer base and business mix is quite diversified.

The geographical fortress shows through in CP Rail's financials. Revenue ton miles (i.e., "RTM" or revenue earned for carrying one ton of freight over one mile) and freight revenue per RTM have been rising steadily. Demand for shipping goods on CP Rail's railroad network is rising, causing rates for each ton mile to consistently increase over time.

Unless the industry were to de-consolidate, high barriers to entry will likely always exist. It is simply unfeasible for any new entrant or eager entrepreneur to obtain, spend, and expect a reasonable return on billions of dollars of capital spend each year.

Capital expenditures for maintenance and growth are in the billions for CP Rail. The industry is also heavily regulated, especially in the US by the Surface Transportation Board ("STB"), meaning large upfront expenses must be incurred by new entrants to obtain regulatory approval to build a rail network.

Adding to the list of issues in entering the market is the utter lack of opportunities to consolidate operationally and the stringent regulatory environment in place that discourages mergers and acquisitions ("M&A") in an already-consolidated industry. New entrants likely have negligible opportunities to partner with, or purchase Class I railroads in North America.

Where its rails currently exist, there is next to no chance a new entrant can uproot the massive industry incumbent, CP Rail, plain and simple.

Even though aircrafts, trucks, and ocean liner transportation businesses compete with railroads, railroads are the lowest-cost option in areas where no efficient waterway connections exist. This is especially true with bulk commodities, CP Rail's largest business segment.

CP Rail's dense and vast 13,000-mile network makes it almost impossible for new entrants to compete based on its low marginal costs and ability to allocate capital towards growth opportunities and technology. Lowest cost wins.

In contrast to its closest competitor, CN Rail, CP Rail boasts a network with plenty of short routing options for customers to choose from in key lane areas. For example, CP Rail connects Vancouver to the US Midwest, Chicago and Detroit, and the East and West Canadian coasts with shorter transportation services than CN Rail.

In addition to these short routing options, CP Rail also has a plethora of connections with other Class I railroads in Canada and the US. It does not end there — CP Rail partners with smaller short-line partners to expand its reach, provide exceptionally efficient services to customers, and make sure customers are getting the most bang for their buck.

In our consumer-centric part of the world, time is money. As a result, we believe CP Rail's short routes in key lanes is an underrated competitive advantage from which pricing power can be drawn.

CP Rail recognizes that the leading transportation services of tomorrow must invest in technology and streamline operations today.

The company's high margins are supported by its efforts to nail down incredible performance. CP Rail operates under a precision railroading using such methods like Precision Scheduled Railroading ("PSR"), a strategy using point-to-point stops across its network of track and terminals to pick up and drop off train carts.

CP Rail also created the Railway Performance Monitoring ("RPM") and Trip Plan systems. The former allows it to increase the volume of deep internal performance data and the latter helps CP Rail keep track of shipments from pick-up to drop-off.

PSR, RPM, and Trip Plan are some of the efforts that collectively contribute to CP Rail's exceptional operating performance. Over the past few years, train speed, terminal dwell, train weight, and train length are all trending in directions that imply better services and more value to customers.

Other notable technologies leveraged by CP Rail include:

These efforts, in conjunction with consistent reinvestment to improve processes and technologies, mean that CP Rail is able to inspect tracks and railcars quickly, improve safety, save on input costs (e.g. fuel), and provide a better service to customers at the end of the day. These efficiencies are exemplified in CP Rail's financials - the company has the best margins of all the Class I railroads.

We expect operating metrics to continue to improve throughout the intermediate time horizon as these efforts translate into efficient spending and growing revenues.

Room on the Balance Sheet

Despite the capital-intensive nature of the industry, CP Rail is (surprisingly) in a very strong financial position. Competition is fierce and capital expenditures for growth are on the forefront of the railroads' priorities, but CP Rail still has a low amount of net debt (total debt including leases less cash) as a multiple of EBITDA.

We believe these efforts are bearing fruit, giving the company financial optionality to take on large projects and investments without being overburdened by intolerable levels of debt. We think investors should be excited in this regard. 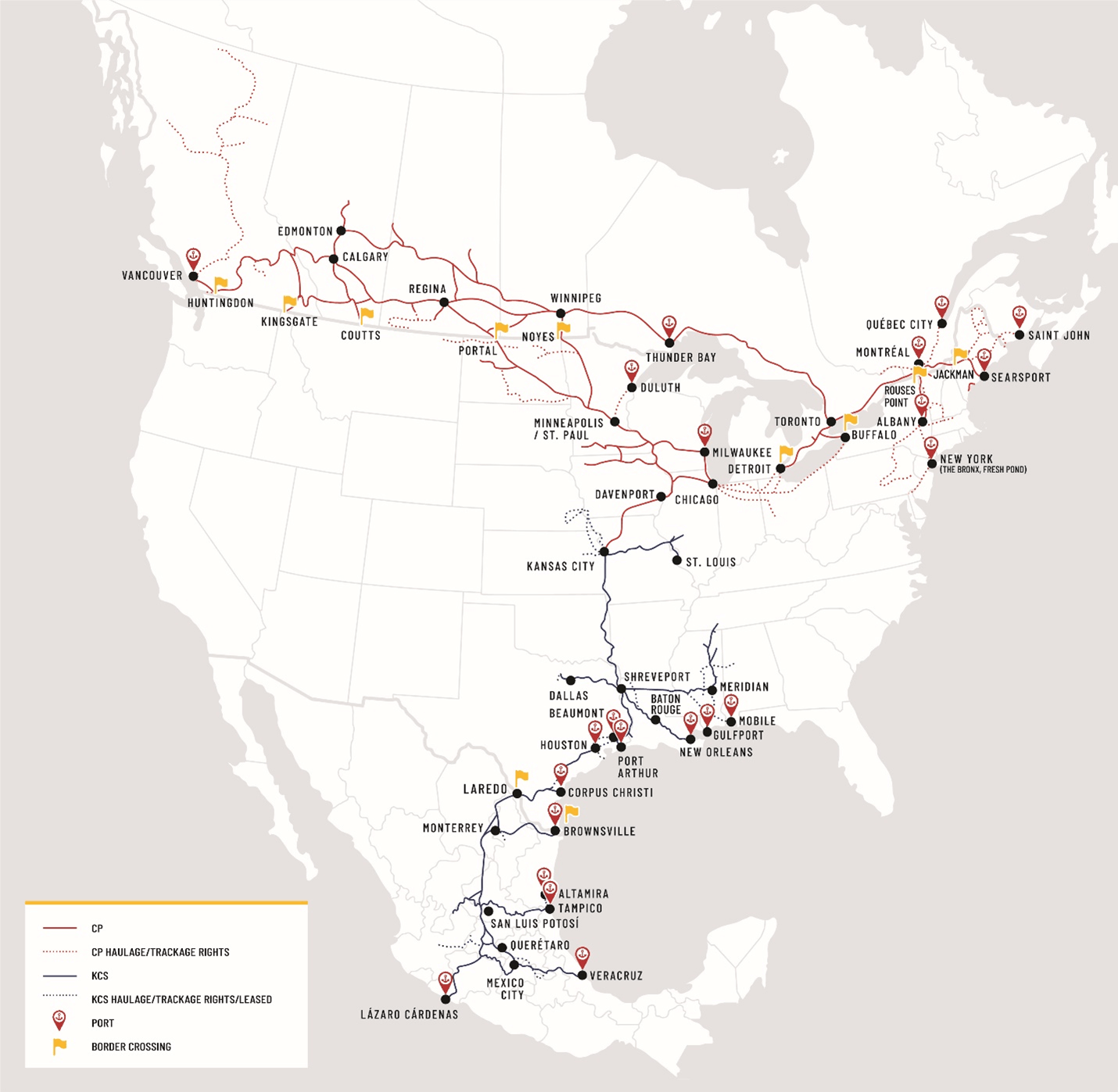 While we believe the CP-KCS merger will bring various opportunities to the table, it also carries potential pitfalls. Given the fact that CP Rail offered a premium to purchase KCS and subsequently raised its bid as the feud with CN Rail picked up, it exposes CP Rail to the risk of "overpaying" - not realizing the full synergetic potential it had originally set out to obtain and ultimately destroying shareholder value.

The timing of these synergies are also uncertain and may not materialize. Nonetheless, we are optimistic on the prospects of the combined company should the STB ultimately grant full acquisition approval.

Most of CP Rail's revenues are generated from freight, which include commodities from industries that fluctuate with the market. When the economy does poorly, or any of these sectors struggle, CP Rail's financials could face strong headwinds in the near term.

Since CP Rail carries freight for chemical and energy, it exposes CP to legal liability if any of the hazardous material leaks or spills and harms the immediate environment.

In addition, Joe Biden's recent executive order issued to the STB to examine rail competition may set a new precedent in the market that puts consolidation further out of favour and hurts profitability for the railroads, including CP Rail.